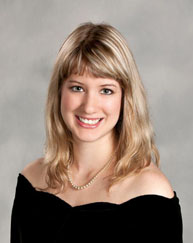 Everyone at Mount Union really made an effort to make you into your better self. That academic push really prepared me for law school.

My mom went to Mount Union so I had the alumni connection. I was originally going to visit three or four schools, but as soon as I stepped foot on Mount Union’s campus and met the people, there was such a sense of community and I felt that everyone there had a willingness to help contribute in how I would learn and grow in my four years there. The decision was an easy one.

It seems there is a real sense of community on the campus. Everyone is so willing to help each other, everyone is there to help you and there are so many advantages and opportunities you can take to really better yourself. That’s what made Mount Union stand out to me.

Dr. Jack Desario, professor of political science, pushed me more than any person I’ve ever met. I came in having a lack of confidence in myself and my work and he always pushed me to be a better version of myself. I credit him as the reason I’m going to law school.

There was a real sense of camaraderie in the honors program and I made so many good friendships. It was nice to have a core group of people to study with during finals. The ability to work so closely with my professors to better myself and get through the process of getting into law school helped me so much.

I had two internships during my time at Mount Union. As a junior, I worked with Kenan Advantage Group in Canton, OH as a corporate intern in their safety department. During my senior year, I worked as a legal intern at Susan Hulit Burns’ law firm in Massillon, OH. While there, I helped with bankruptcy and family law cases and observed trials.

Everyone at Mount Union really made an effort to make you into your better self. That academic push really prepared me for law school. It seemed I was ready for the rigors of law school more than I thought I would be and I wouldn’t be there if there wasn’t for such a push for academic success at Mount Union and especially in the pre-law department.

After law school, I would like to serve as assistant district attorney for a county and work my way up to being an elected district attorney. I want to make a difference in the community around me and to be able to seek justice for those who can’t seek it for themselves. If I could make some sort of impact in the legal arena or in my community, that would be an ideal job for me.