There is something special about the University of Mount Union.  Students and alumni alike describe it as a sense of community and belonging – a place where bonds are formed, and dreams come true.  It is hard to put into words, but it can only be made possible by the incredible, supportive community all over campus and throughout the entire Purple Raider family.

Mount Union relies on its alumni and friends to help keep this feeling alive and to continue a long tradition of excellence by asking them to give back in a variety of ways.

Can we count on your support?

Your Gift Makes a Difference

When you make a gift to the University of Mount Union, you create opportunities for today's students to succeed. The profound impact your support has on Mount Union can be seen across campus in our state-of-the-art facilities, the energy in the classroom as professors share their expertise with eager students, and the excited smile of each new graduate as they embark upon a life filled with meaning and responsibility in their communities around the world.

Our Purple Raiders can look forward to a brighter and more vibrant future because of the support of our alumni, parents, employees, and friends. YOU make a difference!

Your gifts change lives and help prepare students for fulfilling lives, meaningful work, and responsible citizenship, all while allowing them to concentrate on their education and helping keep Mount Union an affordable option for generations to come.

On behalf of our students, faculty, and staff, we are deeply grateful to everyone who chooses to give back their time, talent, and treasure to invest in today’s Purple Raiders, the leaders of tomorrow.

Opportunities to Give Back

There are many ways to make an impact on the University of Mount Union and its students. Consider the following: 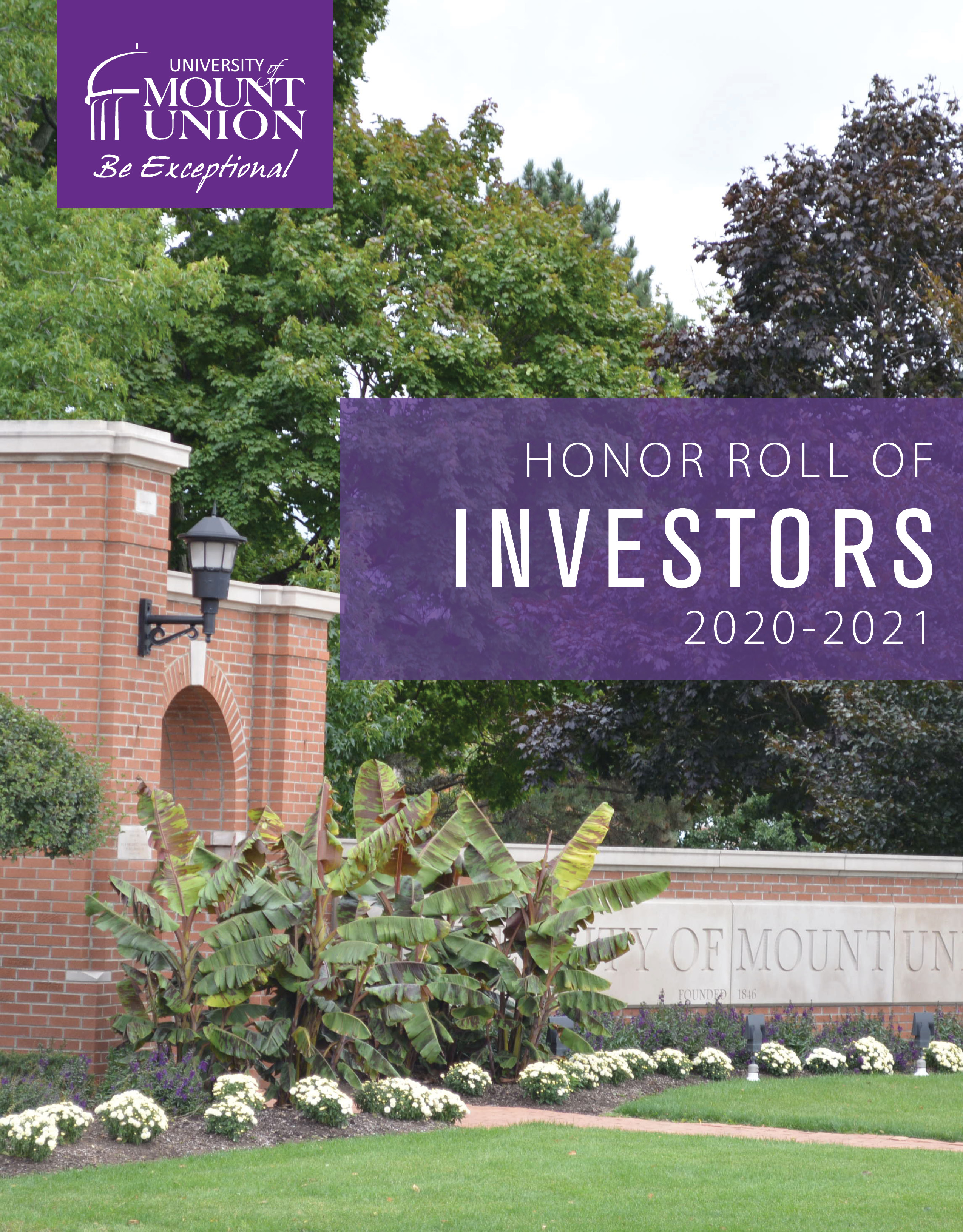 View the Honor Roll of Investors

Ways to Give Back

Family has always been at the center of Bob Wakeham’s ’68 life. Bob applied to Mount Union because of a family connection through his uncle and cousin, both of whom attended. “I decided that Mount Union was a good fit because of the smaller school size,” he said. Little did he know the big impact that a small school would make on his future.

During his time at Mount Union, Bob became a brother of Alpha Tau Omega and a member of the wrestling team. “I was not a very good student my first year, but Mount Union made me feel valued and saw something in me that I didn’t necessarily see in myself.” The close-knit community supported him like family, and although he jokes of having too much fun in college, he found his love for teaching and science early on.

Upon graduation, Bob continued his education and obtained two master’s degrees, one in education and another in business administration. He taught in Cleveland, Ohio for four years and then taught with the Department of Defense in Germany during the Cold War for another four years. “Teaching provided me with opportunities to see parts of the world – good and bad – that I otherwise would have never seen.”

Bob returned from Germany in 1977 and began a new career in educational textbook sales. Over the course of the next 35 years, Bob did a lot of traveling and relocating for business. To stay active, he took up running for exercise while on the road and began competing in marathons. Bob eventually ran a marathon in each of the 50 states and then set a goal to run a marathon on each continent. He completed marathons on the first five continents and then set his sights on Asia and Antarctica. His second to last race was the Great Wall marathon in China. Finally, he endured the freezing cold temperatures, snow, and ice in the Antarctica Marathon. He hung up his running shoes for good in 2016 after successfully completing 75 races.

Today, Bob and his wife Karen live in Maineville, Ohio. They have three children and three beautiful grandchildren who live nearby.

Bob chooses to support The Mount Union Fund each year with gifts from his IRA. “Mount Union was accepting, and the community believed in me like family, despite the many bumps I faced. It feels good to give back. If Mount hadn’t believed in me 50 years ago, then my life would have been completely different.”

Bob’s financial advisor was the one who recommended he consider the IRA charitable rollover option to lower his taxable income. “Many don’t know that the opportunity is there, it’s simple, and something great to keep in mind,” Bob explained. “Given what I’ve experienced in life, charitable contributions mean more to me now than they did 30 years ago. I feel it is my duty to give back to Mount Union, and giving by IRA allowed me to realize that I can make a larger impact.”

“Given what I’ve experienced in life, charitable contributions mean more to me now than they did 30 years ago. I feel it is my duty to give back to Mount Union and giving by IRA allowed me to realize that I can contribute more.”

The Diamond Circle celebrates an extraordinary group of investors who share a similar vision, passion, love, and honor for Mount Union through a lifetime of philanthropic dedication and involvement. This leadership giving society recognizes the loyalty of Mount Union’s most generous benefactors who have made lifetime gifts totaling $1 million or more. It is the profound commitment of Diamond Circle members that enables the University to not only sustain an enduring legacy of excellence, achievement, and pride but also help lay the foundation for what Mount Union will become in the future. 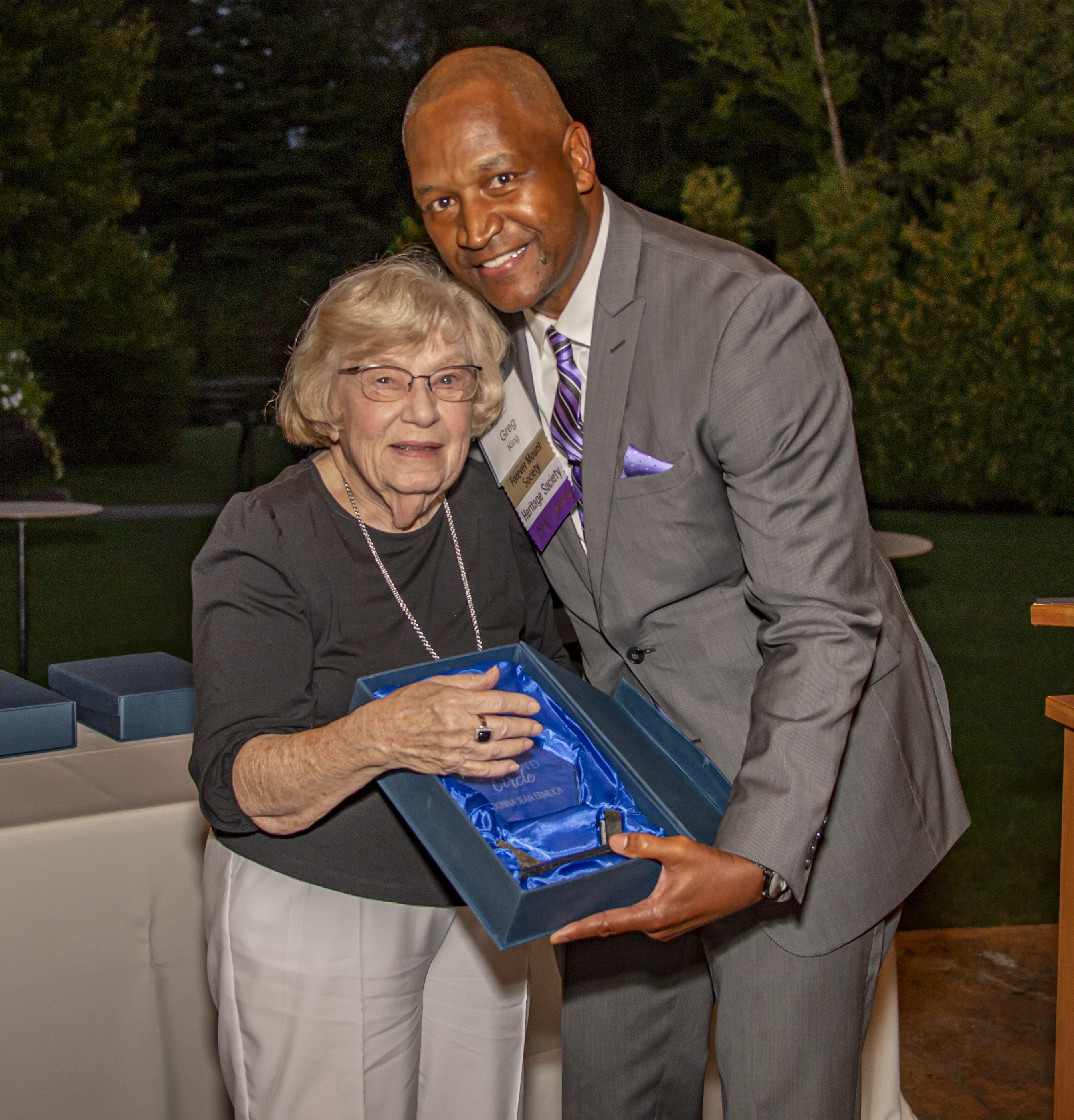 The Heritage Society was established by the Board of Trustees in 1989 to recognize those who have expressed their commitment to the future of Mount Union through planned gifts or estate commitments. The members of this special group of forward thinkers are partnering with Mount Union to plan their legacy. We are deeply grateful to our Heritage Society members for their vision and dedication to our students. Planned gifts include will bequests, charitable trusts, charitable gift annuities, life insurance, and retirement asset allocations. 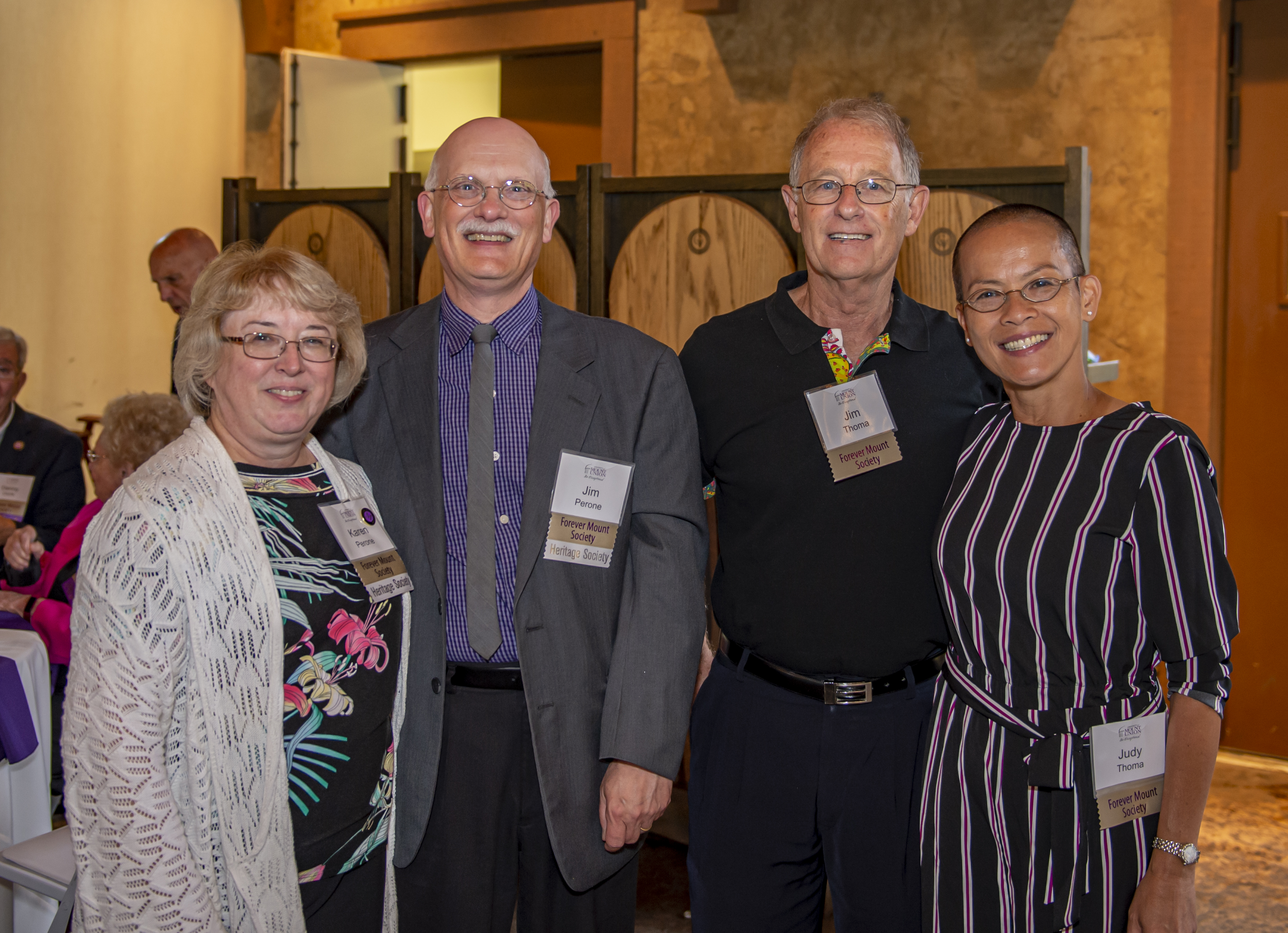 The Forever Mount Society is a loyalty society that recognizes and celebrates donors who have given 25 years or more. It is a special community of faithful investors dedicated to shaping the future of Mount Union. These donors are a valued part of the Mount Union family and because of their continued support, the University is able to provide the highest quality education while preparing our students for fulfilling lives, meaningful work, and responsible citizenship.

Regardless of how much Forever Mount Society members choose to give, they are making a powerful impact in every aspect of Mount Union’s success. Whether they choose to support student financial aid and scholarships, technological upgrades, state-of-the-art facilities, enhanced learning resources, athletic projects, or campus beautification projects, their generosity influences our ability to address emerging needs and to provide new opportunities while upholding the legacy and tradition of excellence here at Mount Union. 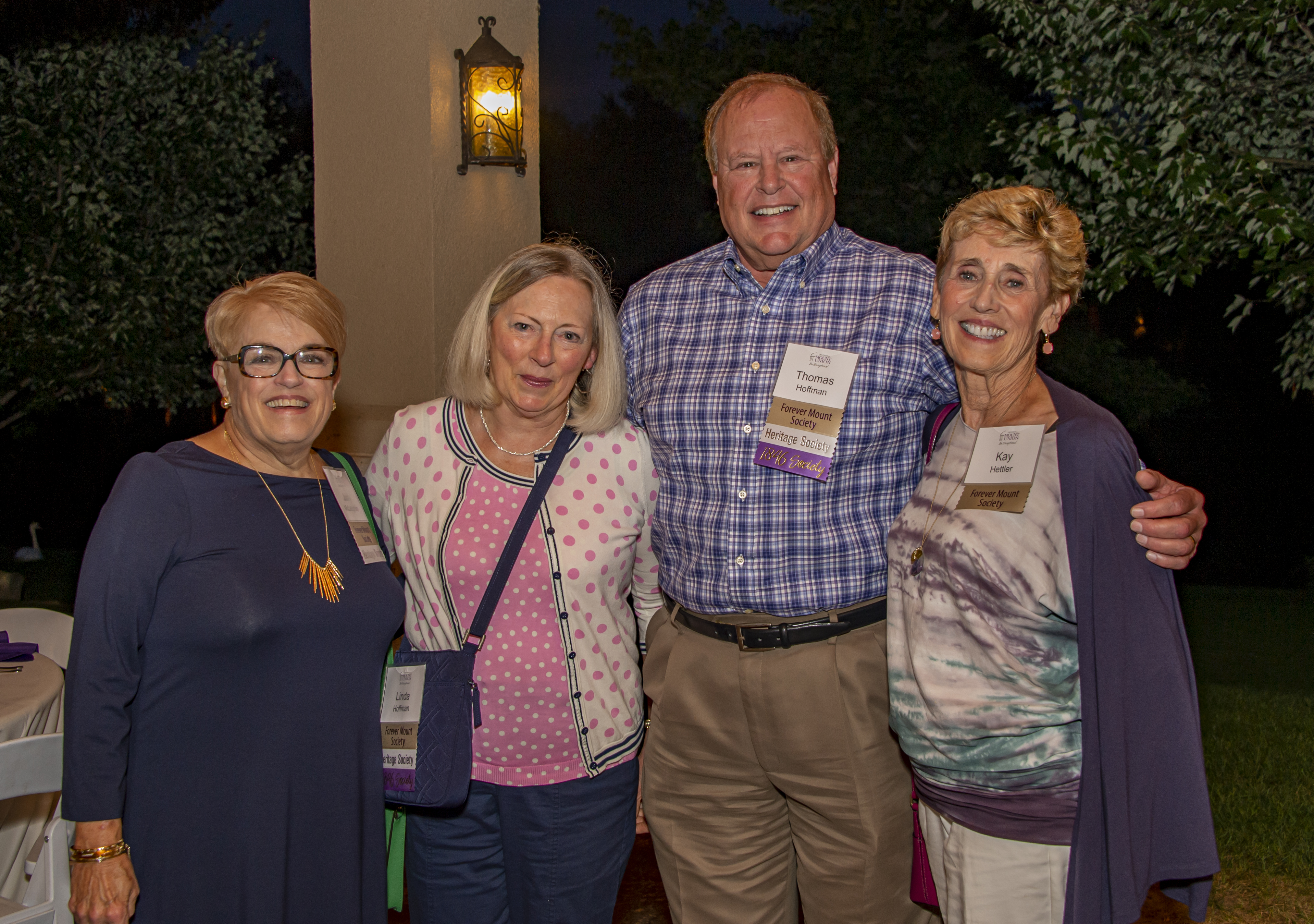 Our premier annual giving society, the 1846 Society, honors and recognizes those donors who share a special commitment to the advancement of the University of Mount Union. Through an annual investment at this leadership level, donors become essential partners in the University’s mission to prepare students for fulfilling lives, meaningful work, and responsible citizenship. 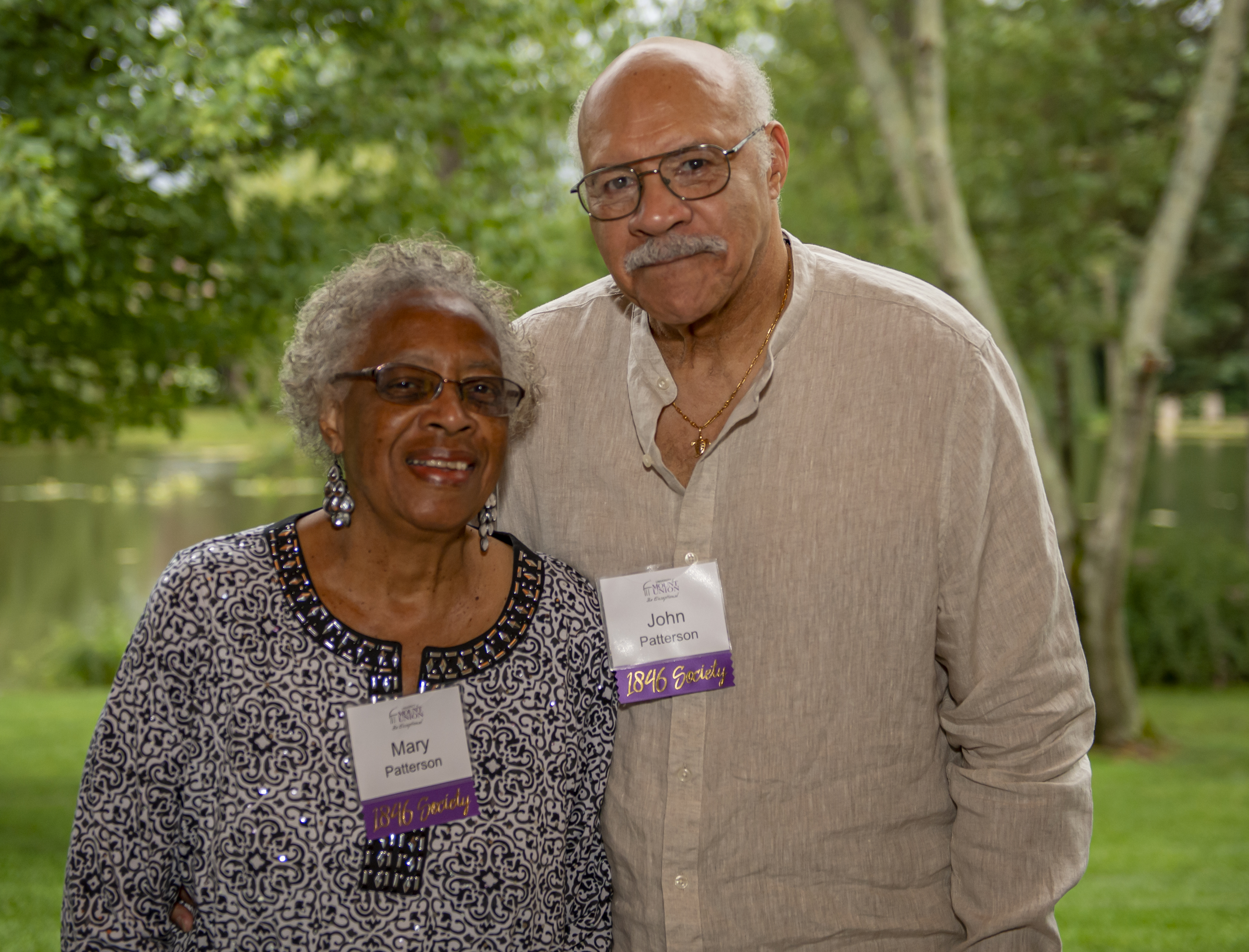