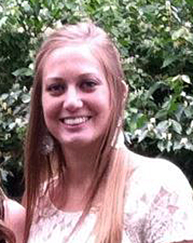 The education I received at Mount Union has proven to be a good investment because it enabled me to enroll in graduate school and provided me with a foundation of knowledge that has greatly contributed to my academic success.

I am in the Master of Public Health program at Wright State University where I am a Graduate Research Assistant for the Smarter Lunchrooms Movement. This program implements evidence-based strategies in school lunchrooms to improve healthy eating. I received the 2014 Karen H. Evans Memorial scholarship which recognizes and supports community and public health education students who exemplify academic excellence, leadership and community service.

I chose to attend Mount Union because I had a great feeling about the school after my initial visit. The students seemed friendly, the campus was beautiful and Mount Union was one of a few schools in Ohio that offered my major.

I really enjoyed working with many professors at Mount Union, but a few of my favorites were Dr. Michael Knepp, Dr. Beth Canfield-Simbro and Mr. Dan Wessel. These three professors were excellent mentors and they were always willing to give me advice on schoolwork, future plans and life in general. They went above and beyond for me and have contributed enormously to my academic career.

At Mount Union, I was an undergraduate research assistant for Dr. Michael Knepp, the president of Psychology Club, a “big sister” in the Big Brothers Big Sisters program and a member of the Cross Curricular Development Committee, the Committee for Campus Life, Public Health Club, Alpha Phi Omega and Sophomore Service Honorary. I still keep in touch with a few close friends that I made at Mount Union.

During my first semester of graduate school, I worked as an insurance broker for McGohan Brabender Senior Solutions. My main responsibilities included analyzing Medicare plans, making recommendations for clients and assisting seniors with enrolling in Medicare plans.

The education I received at Mount Union has proven to be a good investment because it enabled me to enroll in graduate school and provided me with a foundation of knowledge that has greatly contributed to my academic success. I am currently attending Wright State University for my Master in Public Health with a concentration in Health Promotion and Education.

The education I received at Mount Union has prepared me well for graduate school and my graduate assistantship. The courses I took at Mount Union, especially the ones in public health and statistics, have set a great foundation for the graduate level courses I am taking at Wright State University. Much of the information I learned during the first few weeks of school was a review of material from the courses I took at Mount Union, which was a huge advantage. In addition, serving as a research assistant has provided me with valuable tools, such as communicating with professors and peers, which has been helpful with my graduate assistantship.

My favorite part of working with the Smarter Lunchrooms program is that we are implementing strategies in lunchrooms to encourage children to make healthier choices. I don’t know of a job that could be more rewarding than making a difference in the health of children!