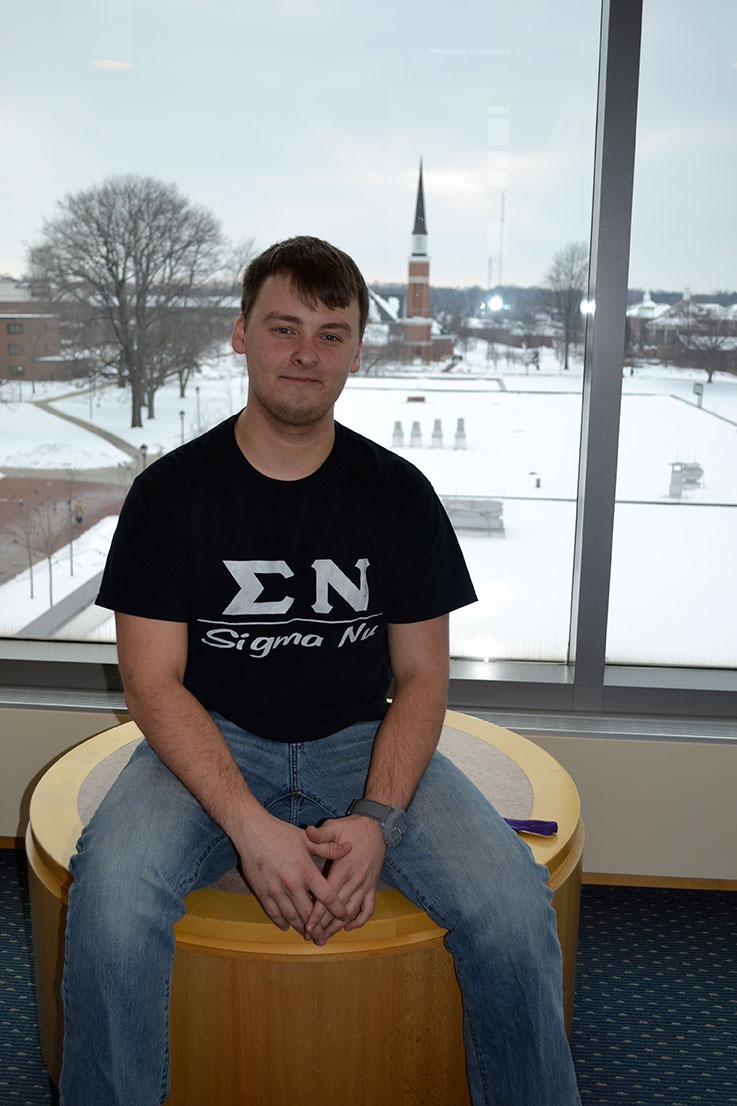 When I graduated from Mount Union, I was able to say that I had covered more than 140 athletic events in nine different states, including three national championship games and two national tournaments.

I work for four different media companies where I write, report, broadcast, or produce talk shows. Between my four jobs, I cover all sports on the high school level along with getting to be a part of the broadcast team for the Pittsburgh Pirates pre/post game show.

Growing up as the child of two Mount Union alumni ­— Dana ’89 and Jennifer (Crone ’91) Hiles — I fell in love with the idea of being a Purple Raider very early. Ironically, attending Mount Union was never once forced on me or even recommended by either of my parents. It was simply a place where I always felt at home. I have many memories of going to playoff football games, hearing stories about the rock, and walking by Chapman Hall as a kid. However, I know I am not the only one who came to Mount Union as a legacy student. Throughout my four years of college, I ran into and even became friends with people whose parents were also alumni. Some of them were even friends with my parents which was pretty cool.

While at Mount Union, I had two summer internships along with two part-time jobs. These all came from being a part of what I like to call the “Purple Raider Network,” which is a combination of the resources, professors, and people on Mount Union’s campus. My internships were with the Mahoning Valley Scrappers, which I was led to via the Mount Union career fair, and WHBC 1480 in Canton, which I was connected with through one of my fraternity brothers and best friends. (Thanks Sam!) The first job that I held after completing my degree was a part time producer position at KDKA News Radio in Pittsburgh. As someone who was born and raised in Western PA, I have always wanted to work at KDKA because of their successful history and great reputation. Though my real dream was to work for the FM side of the station, (93.7 The Fan) I was still shocked that I was able to work for such a big named radio station just out of college.

During my time at Mount Union I was a brother of Sigma Nu Fraternity, a member of the sophomore service honorary, served as a mentor in the Dowling Mentor Program, worked as a coordinator for the Greek Membership Academy and held the offices of sports editor for the dynamo for three years and sports director at 91.1 WRMU for two years. Each of these organizations helped me become who I am today. They have allowed me to grow personally and professionally and introduced me to people who I now couldn’t imagine life without.

My education at Mount Union prepared me for my career in many ways, but I believe the biggest thing that I gained from it was the ability to be well rounded. To be truly successful at a young age, you have to be good at many things rather than being great at one. When I graduated from Mount Union, I was able to say that I had covered more than 140 athletic events in nine different states, including three national championship games and two national tournaments. Not many 22 year olds get to put that on their resume. The experience that I gained from my extracurricular activities was second to none. It is what has allowed me to advance to levels in my career field that I didn’t think I would reach for another five to 10 years.

Staying Connected as an Alumnus

I obviously keep in touch with the friends I made at Mount Union. Not a day goes by when I don’t speak to at least three or four former or current Mount Union students. I even started a podcast, The Unbeaten Dead Horse Podcast, with my fraternity brother, Joe Mertens ’19, who is entering his senior year at Mount. It is easy to stay updated on everything that is happening when your sister and girlfriend (Hi Alexa!) are still students. Aside from them being my personal correspondents, I use social media to let me know what is going on.

“Living in a Dream”

The favorite of my four jobs is being a producer/reporter for the Pirates pre/post game show on 93.7 the Fan. My ultimate career goal was to either cover the Pirates or work for 93.7 the Fan. Now, at only 23 years old, I get to do both. I get to interview players I have cheered for since I was in high school, attend nearly every home game, and have my work played over the air of the Pirates’ flagship station for thousands of people to hear. Every time I head to the ballpark, I am amazed I get through the press entrance. It still feels as if I am living in a dream.

My top goal in life is to be a great father and husband. Career goals are very important to me. However, what I want most in life is to have a happy and healthy family. Though I am nowhere near that point in my life (and in no rush to get there), I do look forward to a day when my most prized accomplishment isn’t work related. An honorable mention goal is to have a building at Mount Union with my name on it one day.