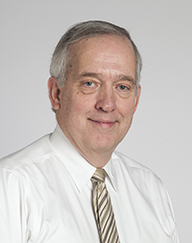 At a school the size of Mount Union, you're not just a number. You have a name and people know who you are. My education was great, and my experiences on the athletic field prepped me so well for everything later in life.

I’m in charge of staffing all athletic events the Cleveland Clinic sponsors with medical personnel. This summer, I will be inducted into the National Athletic Trainers' Association Hall of Fame in Baltimore, Maryland.

A Passion for Sports

I chose Mount Union because I wanted to play golf – I was a golfer in high school. My dad and I traveled to a lot of smaller schools between western Pennsylvania and Ohio. But at Mount Union, I had a great meeting with Coach Ken Wable and the Office of Admissions. Then we went to the Alliance Country Club and I was sold after that. On the way home, I told my dad I was going to Mount Union. I ended up playing golf all four years at Mount.

Meeting with the people in admissions and professors and the size of the school set Mount Union apart for me. My high school graduating class in Pittsburgh was over 700 kids. At a school the size of Mount Union, you’re not just a number. You have a name and people know who you are. My education was great, and my experiences on the athletic field prepped me so well for everything later in life.

Dr. George Thomas was a philosophy professor who I really enjoyed. He was challenging and made us really think. Coach Ken Wable is my all-time favorite person at Mount Union. He’s like another father to me, and I think the world of that man. I always try to go visit him when I come to campus.

Mount Union helped me become a well-rounded person. Besides the classes I took in my major, Dr. Thomas and his philosophy courses helped me understand people and how to communicate with people at all different educational levels and backgrounds. Some people have college degrees and some do not, and I feel like I can communicate and break down barriers so that people can trust me. Probably the most important thing as an athletic trainer is parents and athletes having trust in you.

I want to try to help people as much as I can, and I want to create a safer environment for athletes and people participating in athletics.