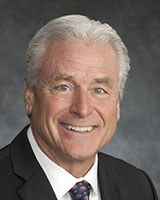 Being involved both academically and socially was natural because it was such a tight-knit environment. As a result, I was much more inclined to meet difficult challenges head-on post-graduation than I was when I started at Mount Union.

During my tenure at Enterprise, I oversaw North American operations for Enterprise Holdings, the parent company of the Alamo, National and Enterprise Rent-A-Car brands. With a fleet of over 1 million vehicles and more than 6,000 locations and 60,000 employees in the United States and Canada, Enterprise is ranked 15th on the Forbes’ “500 Largest Private Companies in America” list.

My grandfather graduated from Mount Union in 1927, and my father attended for one semester in 1960. He always spoke highly of his experience and regretted that he was unable to stay and graduate. We would attend football games over the years, and I became very familiar with the campus, always hoping that I would one day be able to be a part of the next chapter of the Darrah family story at Mount Union. Since then, my niece and her husband have both graduated from Mount Union.

Standing Out in the Crowd

The intimacy of the campus and the classrooms truly sets Mount Union apart from the “factory” environment of bigger schools. Growing up in Kent and having so many family and friends attend Kent State University gave me great insight as to how different the experience would be between the schools. As a result, I gravitated toward Mount Union because I did not want to get lost in the crowd and feel like just another number.

Mr. Holtz was my professor in several management classes and was terrific. He was a retired vice president for John Deere and brought real-world experiences to the classroom. I also greatly appreciated Dr. Steve Kramer, faculty emeritus of psychology, who headed the Wilderness Experience. I gained great insights on how to deal with different types of people from him.

My best memories include joining the fraternity Sigma Alpha Epsilon (SAE) brotherhood and living, working and having a great deal of fun with a bunch of incredible people. We participated in the inaugural volleyball marathon, and it has remained a vivid, positive memory for me.

I was hired as a management trainee for Enterprise Rent-A-Car in July of 1980.

In addition to being in SAE, I was a member of the Campus Center staff and played baseball for three years.

Preparing for Life After College

I always found it very beneficial that since the class sizes were small, I could not shy away from being a participant. Being involved both academically and socially was natural because it was such a tight-knit environment. As a result, I was much more inclined to meet difficult challenges head-on post-graduation than I was when I started at Mount Union.

East Hall was converted to a dorm my freshman year due to the large size of our class.

I do keep in touch with the friends I made at Mount Union, but not as often as I should and would like. It is definitely a goal to do so in the future.

I want to be the best person I can be, and I have a long way to go!