ATLANTA, Georgia — The Alpha Delta Pi Sorority recently announced that Haley Crews ’20, of Wellsville, Ohio was named a recipient of the Dorothy Shaw Leadership Award for the 2019-2020 Academic Year.

Crews, who served as president of the Gamma Theta chapter at Mount Union during her undergraduate career, was one of 16 recipients selected for the award out of the roughly 260,000 undergraduate members of Alpha Delta Pi. The award is considered the highest undergraduate honor the national sorority can bestow to a member.

Recipients must carry a minimum 3.4 grade-point average during the award period and submit an application and supporting letters from references within the sorority and on campus. 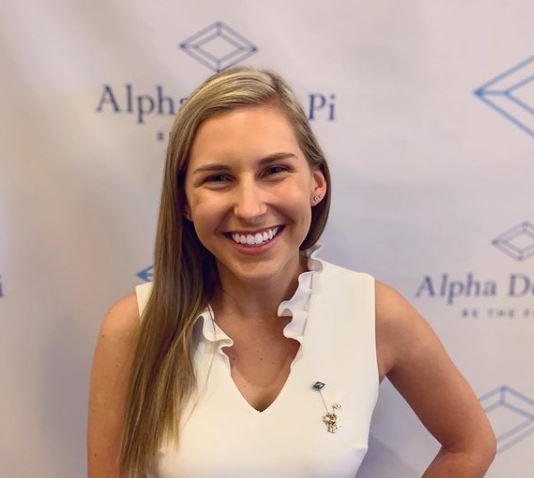 “It is with great respect and admiration we congratulate Haley on this accomplishment,” said Dr. Kate Carnell, director of student involvement and leadership at Mount Union. “Haley is a thoughtful, dedicated individual who served for two terms as president of the Gamma Theta Chapter of Alpha Delta Pi, as well as a coordinator for our annual Greek Leadership Institute. She is a role model for fraternity and sorority life at Mount Union; someone who participated in all that sorority has to offer, no matter her role. She regularly provided a candid, trusted student perspective on the fraternity and sorority experience at the university; and her professionalism was unrivaled. It was an honor to work with Haley."

As an alumna, Crews currently serves as the recruitment advisor to the Eta Beta chapter of Alpha Delta Pi at Allegheny University (PA). She is also pursuing a Ph.D. in sociology at Kent State University with the goal of becoming a college professor.