Alexis Schrader ‘21, a nursing major of Greenville, Pennsylvania, was committed to a state school in Pennsylvania when her best friend asked her to join her on a visit to the University of Mount Union. Schrader went along with her friend to Alliance the fall of her senior year and quickly changed her plans.

“When I stepped foot on campus, I realized I loved this place,” Schrader said. “Everyone was so welcoming and genuine.”

With both of her parents being teachers, it was assumed she would follow in their footsteps. Although Schrader said she enjoyed tutoring students, she found her real passion when she took an anatomy class her senior year of high school. She needed to be in the medical field, and she fell in love with Mount Union’s nursing program.

Schrader filled out an application and was accepted into the nursing program shortly after her first visit.

“The BSN program being direct entry and so highly recommended is an incredible opportunity that you don’t see at other schools,” she said. “I knew I needed to be a part of it.”

Once on campus and immersed in the nursing program, Schrader felt even more confident in her decision. 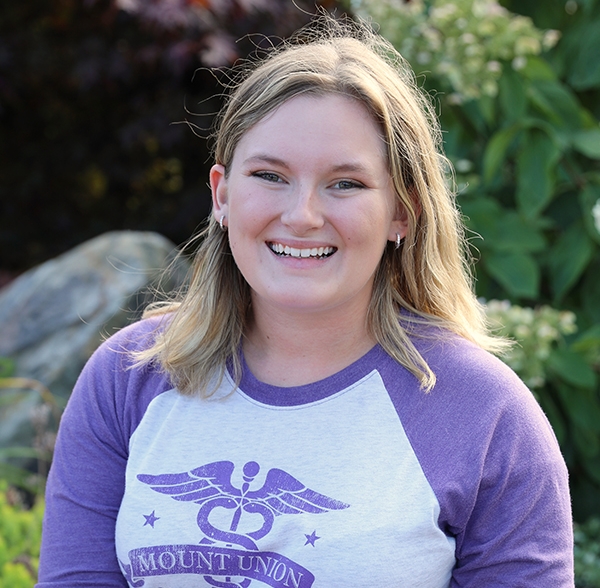 “When I went to my first clinical, I was amazed. So many schools don’t get you clinical experience until later in your college career, but we get it so early at Mount Union,” Schrader boasted, “We also have a pharmacology lab where we learn how to do injections and hang IV bags before we even go to clinicals.”

After three years, the feeling Schrader got when she first stepped on campus has not gone away.

“I get the same feeling every time I come back,” Schrader said. “I’m excited to be here and I love being here.”

But Schrader realizes she would not be here if it weren’t for the scholarships she received.

“My financial aid package made the difference for me in attending Mount Union,” she shared. “Without those scholarships, I wouldn’t be here. Because of scholarship support, I am able to attend an exceptional private, out-of-state school with a direct-entry nursing program. I couldn’t be more thankful.”