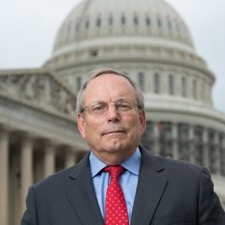 A congressional staffer noticed my radio experience at WRMU FM - the voice of Mount Union - and helped me land a job pushing radio actualities out to stations across the country for the NRCC.

Since my big break and first job on Capitol Hill at the National Republican Congressional Committee (NRCC), my congressional career has zig-zagged all over the place. I took advantage of opportunities as they presented themselves, embracing every chance to learn something new about Congress and how the sausage was really made. From legal, to press, to oversight, I learned everything I could about the operations of congressional offices. But my interests weren’t limited to just Congress; I sought opportunities with the Executive Branch and private sector firms as well.

From Residence Hall to D.C.

For as long as I can remember, I’ve had a keen interest in public policy. In fact, with diploma in hand, I moved to Washington D.C. the day after I graduated from Mount Union. One of my first stops was the office of a newly elected Member of Congress from Stark County who was also an alumnus of Mount Union – Ralph Regula ’48. We had a good discussion and he gave me important advice.

Before my big break on Capitol Hill, I lived in a room I rented at the Alpha Tau Omega (ATO) fraternity house at the University of Maryland. The rent was cheap and practically all I could afford with the money I earned working my first job out of college – making water beds and stuffing pillows. With intolerable heat and humidity accompanied by daily thundershowers being the typical forecast on a summer day in the nation’s capital, my first job was figuratively and literally in a sweatshop. To pass the time, I intently listened to nonstop radio coverage of the Watergate hearings underway at the time.

On the rare occasion that I had free time, I would schlep my resume up to Capitol Hill in hot pursuit of my long-sought-after career in public service. And one day, I finally got a break. A congressional staffer noticed my radio experience at WRMU FM – the Voice of Mount Union – and helped me land a job pushing radio actualities out to stations across the country.

The vast majority of individuals on Capitol Hill are under 30, providing me with an opportunity to work with many students and young adults over the years. Over the course of my career, I have mentored and hired dozens and dozens of young people, interns, and graduate students.

Love What You Do

I strongly believe that there is no higher calling than public service, whether at the state, local, or federal level, or at a non-profit. I believe that people who are privileged enough to obtain a good education should pay it forward, which is why I have always sought to mentor and help young people and students when possible. In turn, I have been rewarded for my efforts to help students get off on the right foot by watching them succeed and accomplish great things for themselves and for this country. The pace on Capitol Hill can be grueling and the competition unforgiving, which means, to succeed, you must work harder than anyone else and certainly never waste time watching the clock.  Above all, as is the case with a successful career in any field, you must love what you do.

Looking back at my time at Mount Union, my favorite experiences included working at WRMU, especially the classical music show, and constantly being called out for mispronouncing the names of various composers, being a member of the college wrestling team… until I was hurt, and living at ATO house during the summers.

Over the course of my career, I have served as Chief of Staff and General Counsel to three congressional committees and Deputy Chief of Staff to another. I’ve been involved in hundreds of oversight hearings, a national Congressional investigation on the 2012 Benghazi attack, and the passage of over 100 bills that have been enacted into law. I worked closely with Ralph when I was responsible for the budget formulation and execution at the Department of Interior. In July 2016, after nearly four decades of working for the House, Executive Branch, law firm, and lobbying firm in various capacities, I was appointed by House Speaker Paul Ryan and voted by the House of Representatives to serve as the Chief Administrative Officer – one of three House Officers – an honor that has pushed me to tap into all the experiences I’ve amassed over the years, both good and bad.