Campaign co-chairs Dr. Richard (‘72) and Cheryl (Brown ’72) Drake stated at the annual Alumni Brunch that, as a result of gifts from alumni and friends during the silent phase of the campaign, Mount Union has already raised nearly $34 million with just over two years remaining to reach the $50 million goal. “Mount Union’s continued success hinges on our ability to provide students with an excellent education of exceptional value,” Richard said. “Our calling is to equip students with the skills to create success in their own lives and be leaders in their fields and communities.”

Co-chairing the campaign with the Drakes are former Mount Union president Dr. Richard Giese and his wife, Sandra ’81.

Greg King, vice president for university advancement at Mount Union, hopes the investments made during the silent phase of the campaign will inspire others to participate.

“The generosity of Mount Union’s alumni and friends always has been, and will continue to be, a driving force behind Mount Union’s commitment to providing an exceptional educational experience,” King said.

There are several priorities of the campaign, and Dick Merriman, president of Mount Union, believes that making a Mount Union education accessible to all students remains paramount, with a goal of $25 million earmarked for student affordability.

“The campaign priorities of scholarships, academic and co-curricular program enhancements, new and updated learning spaces and support for the Mount Union Fund will help us provide a high-quality learning experience while helping the families we serve afford a Mount Union education,” Merriman said.

Although investment in affordability is the campaign’s focal point, the learning spaces referenced by Merriman are already becoming integral parts of campus.

The former Engineering and Business Building has been renamed Oak Hall and features extensive renovations to accommodate the more than 500 students and faculty in Mount Union’s growing business and engineering programs. The facility is named for Oak Associates Funds, which is an equity investment company owned and operated by Jim and Vanita (Bauknight ’63) Oelschlager. 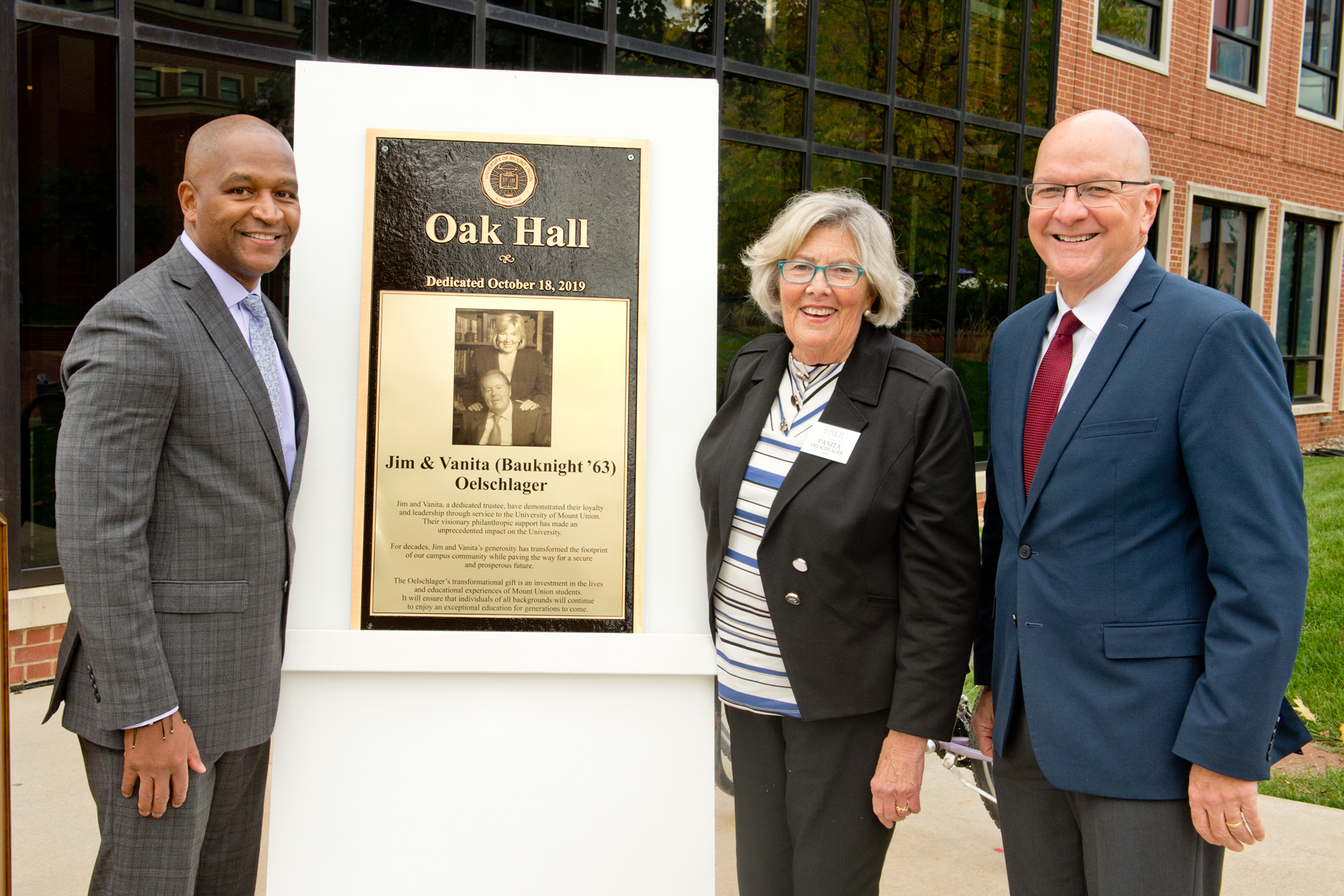 One of the new lab spaces inside of Oak Hall is The Henry Family Laboratory, which will assist in creating hands-on experiences for engineering students at Mount Union. The space was made possible by a gift from Violet (Bica ’44) Ross, a staple in the Mount Union community and namesake of Bica-Ross Residence Hall, and is named for her dear friends Michael and Michelle Henry and their daughters, Jordan and Sydney.

Several athletic facility upgrades were funded and completed during the silent phase of the campaign. Wable Park, named in honor of the late Ken Wable, was dedicated this spring. It provides athletic programs a large synthetic turf practice field. A new running track and roof on the covered stands of Mount Union Stadium were recently completed this fall.

Other projects that have recently begun include the Dom ’72 and Karen Capers Academic and Athletic Center, an 8,000 square-foot addition to support academics and athletics, and Rafeld-Rogers field, the former 23rd Street baseball field named for former Mount Union coach Jack “Skip” Rafeld and former player and Alliance native Mike Rogers.

Oak Hall and The Henry Family Laboratory were dedicated on Friday and Saturday, respectively while Rafeld-Rogers Field will be dedicated on Sunday during the Mount Union alumni baseball game.

Read more about the initiatives of the ‘Inspiring Minds, Transforming Lives” campaign or learn how to become involved at mountunion.edu/inspire.