ALLIANCE, Ohio – The University of Mount Union’s third annual day of giving, titled “Raiders Give,” saw an extraordinary level of generosity from the Mount Union community, as records were shattered from the previous two years.

In total, the June 16 event raised $493,306 for The Mount Union Fund, which was an 89 percent increase in gifts from the 2019 event, all while being done virtually across the country. A total of 1,014 donors gave gifts to the fund — an increase of more than 130 donors from 2019 — which supports student scholarships, technology and other critical student needs across Mount Union’s campus. 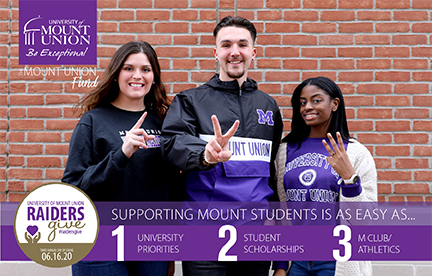 The 2020 event also provided donors with the option to donate to Mount Union’s COVID-19 Student Emergency Fund, for which more than $175,000 was raised in addition to what was already given over the course of the past two months. This effort was driven by a special challenge from longtime Alliance natives Jack and Madge Peters, who generously provided the lead gift to spearhead the challenge.

“Raiders Give was a phenomenal success thanks to the generosity and support of our alumni and friends in the Mount Union community,” said Caitie Shimp ’17, assistant director of the Mount Union Fund. “As students and their families began to feel the impacts of COVID-19, Mount Union established the COVID-19 Student Emergency Fund. During Raiders Give, our community showed its exceptional support for those suffering hardships during the pandemic, allowing the institution to extend its support for those impacted by unexpected and urgent expenses at a time when it is needed most.”

Donors had the opportunity to give for 24 hours beginning at midnight on June 16. The Trustee Challenge was the primary goal of the day, which was to reach 1,000 donors, resulting in an extra $100,000 donation from members of the Board of Trustees. Additional challenges that were met during the event included the Young Alumni Challenge, Faculty and Staff Challenge, Class of 1970 Challenge, and the Parent and Family Challenge.

To view additional results, visit raidersgive.mountunion.edu, or to make a gift to The Mount Union Fund, visit alumni.mountunion.edu/giving.