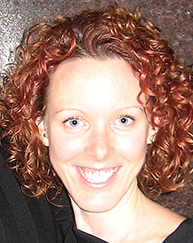 By acting in several productions while attending Mount Union, I was able to understand the importance of scenery and its role in creating the atmosphere for the character. It gave me a strong background in all aspects of a theatrical production.

Shanna was nominated for a 2015 "Outstanding Production Design for a Narrative Period Program" Emmy for her work on MadMen.

I work with a team creating the visual environment that enhances narrative for a production. I serve as the eyes and voice of the production designer. I am the direct supervisor of my crew, construction, paint and set dressing all while maintaining watch on the schedule and budget.

At the time my family was living in Boardman, Ohio, and I wanted to stay close to home. I liked that Mount Union was a small college and had a strong sense of community. I knew that I would get a more out of my education with smaller class sizes. I came to the college with the motivation to pursue a math degree but was also interested in the liberal arts education to explore other avenues of interest.

Professor Rudy Roggenkamp and Dr. Doug Hendel were significantly influential in setting me on the path that led me to where I am today. I came to college thinking that I would leave with just a math degree, but I later found that I also had an interest in theatre. Dr. Hendel taught me the art of acting, speaking confidently and making my voice heard by any audience. Professor Roggenkamp was the one who introduced me to the art of theatre and what goes on behind the scenes of the production. His classes made me realize that there was an artistic side to my mathematical brain and that designing, painting and drafting were just as fulfilling.

As Seen on TV

After graduating, I worked at various regional theatres. The first job I had after moving out to Los Angeles was as an art department assistant on the first season of “Big Love.” I worked in this capacity for several other shows including the movie “Because I Said So” and Nickelodeon's “Zoey 101.” Later I became the assistant art director on Nicklodeon's television show “iCarly.” I worked as the assistant art director on the movies “Twilight,” “Couple's Retreat” and five seasons of the television show “MadMen.”

I was fortunate to have my Mount Union work study program assignment in the theatre. I worked painting scenery and becoming familiar with the props and set dressing items we had in storage. Many hours were spent cleaning paint buckets and organizing the props in storage. All of this gives you an appreciation for the craft and all that goes on to make a production successful.

I was in the theatre, MUC Players and Alpha Psi Omega. I joined the sorority Alpha Xi Delta, and I was even a math tutor for a while – tutoring elementary, middle and high school students.

By acting in several productions while attending Mount Union, I was able to understand the importance of scenery and its role in creating the atmosphere for the character. It gave me a strong background in every aspect of a theatrical production. I was able to experience being both on and off stage. My work offstage – painting, building, acquiring props, drafting and designing scenery – helps me understand the roles everyone plays in order to achieve a finished product. My mathematics education becomes useful when dealing with proportions, budgets and ratios – often when figuring out the distance back drops should be placed from scenery or what proportion to make certain scenery elements.

Living in California makes it difficult to come back for Homecoming – although it's something I have wanted to do. I stay connected and informed about what's happening at the University by reading the Mount Union Magazine and the email updates I receive.

School Runs in the Family

I feel pretty fortunate in my accomplishments thus far. I ran two marathons, had three children and had success in my career. I think a goal I can strive towards is to be able to send my children to college and give them the opportunity to choose a path to follow.

My job allows me to use both art and math every day. I make design choices as well as logical decisions as an art director. I enjoy being a part of a creative team who take pride in what they present on camera. We research everything and ensure that each detail is period-appropriate and specific. Each job goes for a certain time frame, and then, when the show is over, you move on to the next project.